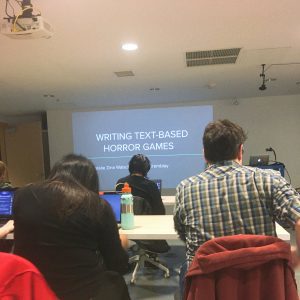 Although Halloween has long since passed, I still find myself consumed with haunting thoughts. This is due greatly to the Writing for Text-Based Horror Games workshop I attended acouple weeks ago. Hosted by Dames Making Games (DMG) on October 24th and co-presented by Kaitlin Tremblay, the lead narrative designer of Ubisoft’s Watch Dogs: Legion, and speculative fiction author/games critic, Natalie Zed, it was an incredibly chilling and educational night. If you aren’t familiar with them yet, DMG is a not-for-profit video game arts organization, dedicated to creating spaces for marginalized creators interested/working in the games industry. They offer lessons on programming and design, provide production/exhibition facilities, and use game development as an act of resistance to give creators the ultimate agency in the expression of their identities.

The night consisted of a 2hr lecture in which Tremblay and Zed discussed their experiences writing text-based horror games through a compassionate, feminist lens. One of the most interesting points covered was horror’s ability to empower women. Although the genre is commonly associated with ultra-violence and female suffering, Tremblay and Zed shed light on the media’s recent re-evaluations of horror as a feminist necessity due to its inherent message of believing in women and their fear. To illustrate, the formula of a stereotypical horror film (emphasis on stereotypical, there have been very many innovative exceptions) goes as follows:

1. Self-assured male protagonist is oblivious to the insidious things happening in the world around him and/or to the people in his life.
2. A woman involved with the protagonist (love interest, mother, daughter, etc.) expresses their fear but is immediately dismissed as being too paranoid or unreasonable.
3. Lo’ and behold, the woman’s suspicions of danger are confirmed to be true and the characters suffer from a threat they easily could have avoided had they listened and taken the woman seriously in the first place.

Upon watching these events unfold, audience reactions typically involve a lot of groaning, cursing, screaming, and face-palming (at least, that’s how I usually react). That fear, anger, and frustration, however, is an incredibly effective tool at the horror genre’s disposal because the use of highly embellished fiction can draw startling parallels to reality that other genres are unable to achieve as effectively as horror does. Women’s fears in real life, for example, are often met with patronization and negligence due to the unfortunate reality that most people are unable to empathize with the danger a woman faces if they don’t experience it themselves. In horror, however, consumers readily submit to the fictional experiences at hand and are able to view for themselves the terrifying things they wouldn’t in their daily lives. A walk
home alone at night, for example, may not be scary for a man, but its a completely different story in a woman’s shoes. It should also be noted that horror’s message of belief can be spread to otherwise marginalized groups as well (eg. Get Out’s illustration of the fears black people experience in the face of racism). Horror allows us to think far more deeply and critically about seemingly ordinary things by believing in the fears held by people from other walks of life.

This is an incredibly powerful thing – horror, while it can be highly stylized, is able to imbue fantastical and horrific experiences with authenticity and depth, making for truly engaging and empowering narratives. Plenty of other things were discussed that night, but that was one of the most impactful lessons I’d received and it continues to make me re-evaluate the fiction I consume and create, and I hope its given you some interesting food for thought to ponder. If this made any impression on you, DMG is located at the Toronto Media Arts Centre (just about half an hour away from Ryerson) and I highly recommend checking them out for more informative and provoking events in the future. Just be sure to say hi if you see me!

Until next time,
Sofia.

Sofia is a 2nd year Media Production student with a concentration in Digital Media. Although she comes from a background in prose and screenwriting, she's pivoted into interactive fiction and game design with a special interest in exploring horror. Her body of work ranges from the nightmarish and macabre to the cute and sweet, and you can find her work at https://www.cadavher.com. Outside of games and writing, her interests include: crying over comics, watching movies that are so bad they're good, and consuming as much bubble tea as humanly possible.