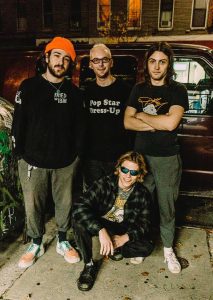 Toronto is home to a handful of high-profile artists, but there’s always a hunger and thirst for something more. Something different. The city is a breeding ground for great independent artists and bands and maybe they don’t catch your eye, but this one should. Goodbye Honolulu, an up and coming Rock and Roll band, is formed by Max Bornstein on drums, Fox Martindale and Emmett Webb on guitar and vocals, Jacob Switzer on vocals and bass. The members all grew up in Toronto – Emmett and Max from the East end and Jacob and Fox from the downtown area -and formed towards the end of their high school career and into the start of their college education. Emmett, Jacob and Fox all took Seneca College’s ‘Independent Music’ program, which had helped them learn a lot about production and being an artist that’s not necessarily a part of a label. Max, however, took the ‘Music Industry Arts and Performance’ program at Centennial College saying he wanted more of a commitment with a three-year program. All of the Goodbye members have solo projects on the side, Emmett noting, “It’s cool to play live heavy music as Goodbye and then also record music because I find our music is mellower generally, and it’s nice to have different outlets for stuff … to have different outlets and to just go different ways by yourself, I think it’s really important to do as well as to keep a thing going..”. Their influences are always changing and very diverse from member to member, Max saying that “[his] music taste is like frozen in 2005 .. I just love pop-punk..”, but the general influences include The Growlers, Ty Segall, and a lot of L.A. garage bands. They’re currently signed to Fried Records, a label they own themselves and started towards the end of high school as well.

Goodbye Honolulu’s latest album, More Honey, was released December 7, 2018. This album comes after their 2017 EP, No Honey, and their self-released debut album Heavy Gold (2015). More Honey kicks off with the punchy Lorry Can’t Love. Max starts on drums and we don’t have to wait long for the first verse to come in with Fox singing about the nightmares that he’s living in and how he hates the fair 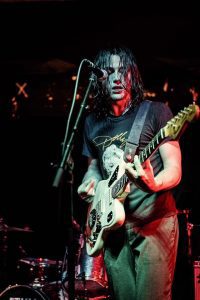 because of the way people stare at him. This is accompanied by an almost grungy-sounding electric guitar melody, that makes me reminiscent of Dope on a Rope from The Growlers. The chorus builds with a strong bass and guitar with even stronger vocals that in the verse which is done by layers and possible harmonies from the rest of the band members. Goodbye hit the ground running with the first track, and there’s no sign of them slowing down. The track that follows is Barbados Slim, a heavy track all the way through with a hook that you can’t help but sing along to. I can’t help but hear similarities or slight influence from The Hives and the Arctic Monkeys second studio album, Favourite Worst Nightmare (2007). More Honey’s third track, Take You Dancing is a little less heavy, a little more mellow, and could be on a Sunday morning Spotify playlist for you to listen to while you have your morning coffee and attempt to be productive. This isn’t to say that they don’t have any of their heavy guitar, bass, and drum elements in Take You Dancing, they just turned it down and slowed it down a little more. Codeine, the fourth track of this album, picks the tempo back up with Fox singing about how a girl steals his dreams and codeine, and how it’s hard for him to get out of bed after thinking about what she had said to him. The entire More Honey album feels like a nostalgic mix of all of the indie-rock and alternative bands you find in high school when you’re discovering your music taste, but with a modern twist and fresh feeling. 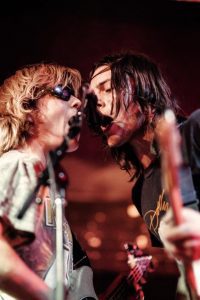 Goodbye Honolulu’s newest single, U Got It, was released April 19. 2019. The track has relatively the same sound as the More Honey, but it’s not something you can get tired of. With the upbeat guitar, punchy drums, and a chorus that you want to scream at the top of your lungs, U Got It is the perfect single to come after their latest album.

In their first few released Goodbye was still finding their sound, but they’ve seemed to have found it in the past few years. More Honey, in my opinion, didn’t have one bad song in the track list. You can listen to it in its entirety without getting tired of it, all of the tracks are distinct and different from one another, but still glue together for a cohesive sound. There’s still no release date for their next album, but if U Got It is any indication of what it’ll sound like, we’re all in for a treat.

You can find them on Instagram at @goodbyehonolulu. More Honey and U Got It are available on all streaming platforms.

Hey there! I’m Kassandra. I’m a second year RTA: Media Production student focusing on audio and radio production. My interests include: writing music, supporting my caffeine addiction, reading some quality books, and collecting vinyl records. I have experience based in music journalism, so I’m excited to be writing some artist spotlights and reviewing some Ryerson based music this year!