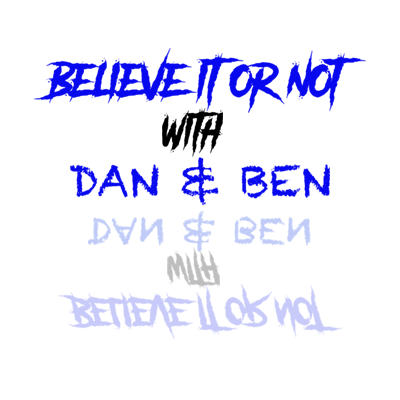 Our show on SpiritLive is called Believe it or not with Dan&Ben. Our show consists of 2 host, Dan and Ben (Danny and Benjamin). The hosts will have a small introduction. We are planning to start the show off with an opening song and a choice of a conspiracy theory. This beginning segment of the show involves “theory of the day”, the part of the episode where Dan and Ben choose the theory that will be discussed throughout the episode. The beginning of the episode will also include a welcoming of a guest appearance(different guest each time) that will be there throughout the duration of the episode. (15 minutes)

Later on after the break we will have a small end off discussion, concluding final thoughts. Dan and Ben will then proceed to give their final opinion on whether they believe in the theory or not. So Dan will ask Ben “do you believe it or not ben?” and then Ben will ask Dan the same thing as well. Last there will be a host sign off to end the show with some closing music.

Our show offers a wide variety of different and entertaining topics/theories to talk and discuss with the viewers. Our topic being will make our show very interesting for viewers to toon in. Also our max age group for the show does not range, it is for anyone interested in learning more on conspiracy theories. We know many students our age or our generation as a whole is very interested in our topic as we are as well.